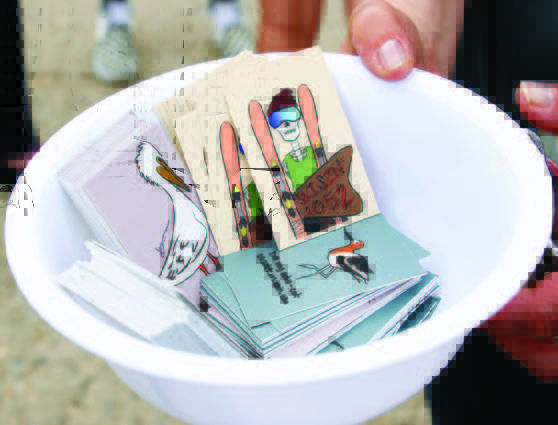 Wendy Wischer, published an article in the Friends of the Great Salt Lake Newsletter about the capstone project the Honors class Art, Action & the Environment did last spring. Read the article below.

For the past several years, I have been teaching a course I created called Art, Action, & the Environment for the Honors College at the University of Utah. This course explores art, environmentalism, and activism with research and art-making activities. Each class chooses the local environmental issue they want to focus on for their collaborative, capstone project, a socially engaged art event. During the spring semester 2022, this particular class chose to focus on the drying of the Great Salt Lake as their local environmental issue. They titled their event U Save the Lake.

U Save the Lake was held just before Earth Day on April 21, 2022 to bring awareness to the rapid shrinking of Great Salt Lake. The class’ project focused on multiple aspects such as the diversion of the Bear River, the effects of the Lake shrinking on snowpack, air quality, and the immense scale of the proposed Inland Port, as well as impactful legislation surrounding this issue.

This diverse team of Honors students—with disciplines ranging from Nursing, Kinesthesiology, Chemical Engineering, Film and Media to Environmental Studies—explored the intersection between the arts and environmental action, learning how to bring awareness to their community about the drying of Great Salt Lake in an engaging and creative way. During the event on April 21st, 2022 at the University of Utah’s Marriott Library Plaza, students shared information about the shrinking of Great Salt Lake to the campus community. They printed a large-scale sign with a pledge for personal water conservation. When a passerby signed it, they received an ice pop and the students discussed with them how personal water conservation directly impacts snow pack. The pledge included turning off the faucet, taking shorter showers, washing full laundry loads, and holding others accountable. Over 75 signatures were obtained on the pledge for personal water conservation. 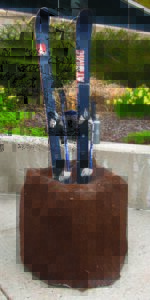 Next to the table with the pledge, was a sculpture made of a faux dirt mound and a pair of skis sticking out, similar to the way skiers stick their skis and poles in snow. If we continue to lose our snow pack, we won’t have snow to ski on. The sculpture served as a grave image of this possibility. Participants also received a custom designed sticker reflecting the grave nature of skiing in the future, should we not take the needed action now.

Two large images, laid on the ground, showed the scale of the proposed Inland Port at 16,000 acres next to the scale of the SLC International Airport at 7,700 acres [Image 2]. This stark visual showed the enormous scale of the proposed Inland Port and just how impactful it will be to our valley. Students drafted a petition to Governor Cox, pleading that the Utah legislature enact regulations to minimize the negative impacts of U Save the Lake [Image 1], photograph courtesy of Amelia Walchli [Image 2],photograph courtesy of Amelia Walchli 9 the Inland Port on the health of both humans and the natural ecosystem, since the construction of the 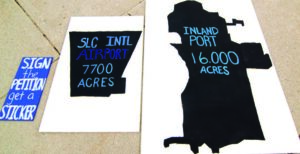 Inland Port seems inevitable. Over 260 signatures were acquired and mailed to Governor Cox. Passersby also received stickers that were custom designed with images of 3 birds common to the Great Salt Lake ecosystem [Image 4]. They were accompanied by catchy phrases to grab attention to their plight, and with the eco-art website that the students designed with additional information including links to local organizations such as FRIENDS of Great Salt Lake.

In addition, they had an interactive, custom cornhole game that was composed of three parts. The three parts were paintedwith the shrinking Bear River as the main source of water for GSL. They were labeled Past, with a large hole, Present, with a medium hole, and Future, with a hole too small to actually play the game. This represented the diversion of the water from the Bear River away from GSL. Participants engaged in conversations about this diversion of the Bear River and the necessity to keep it in GSL as the Bear River provides 60% of the water to the Lake and the diversion significantly contributes to its historically low level.

All who approached the table and engaged in conversations received free salty snacks: salt water taffy and sea salt caramels. Support for this event was received from the Sustainable Campus Initiative Fund through a SCIF Grant, the University of Utah’s green grant program.

Great Salt Lake impacts many different aspects of life here in Salt Lake City and if this problem isn’t addressed immediately, we will begin to see increased dust storms and increased poor air quality, less snowfall, and continue to lose precious habitat for the wildlife that inhabit and migrate through the Lake and surrounding areas. The students created pages on the website dedicated to this class, to provide more information for the community at large. Learn more at ecoart.art. utah.edu as we are all responsible for saving Great Salt Lake.