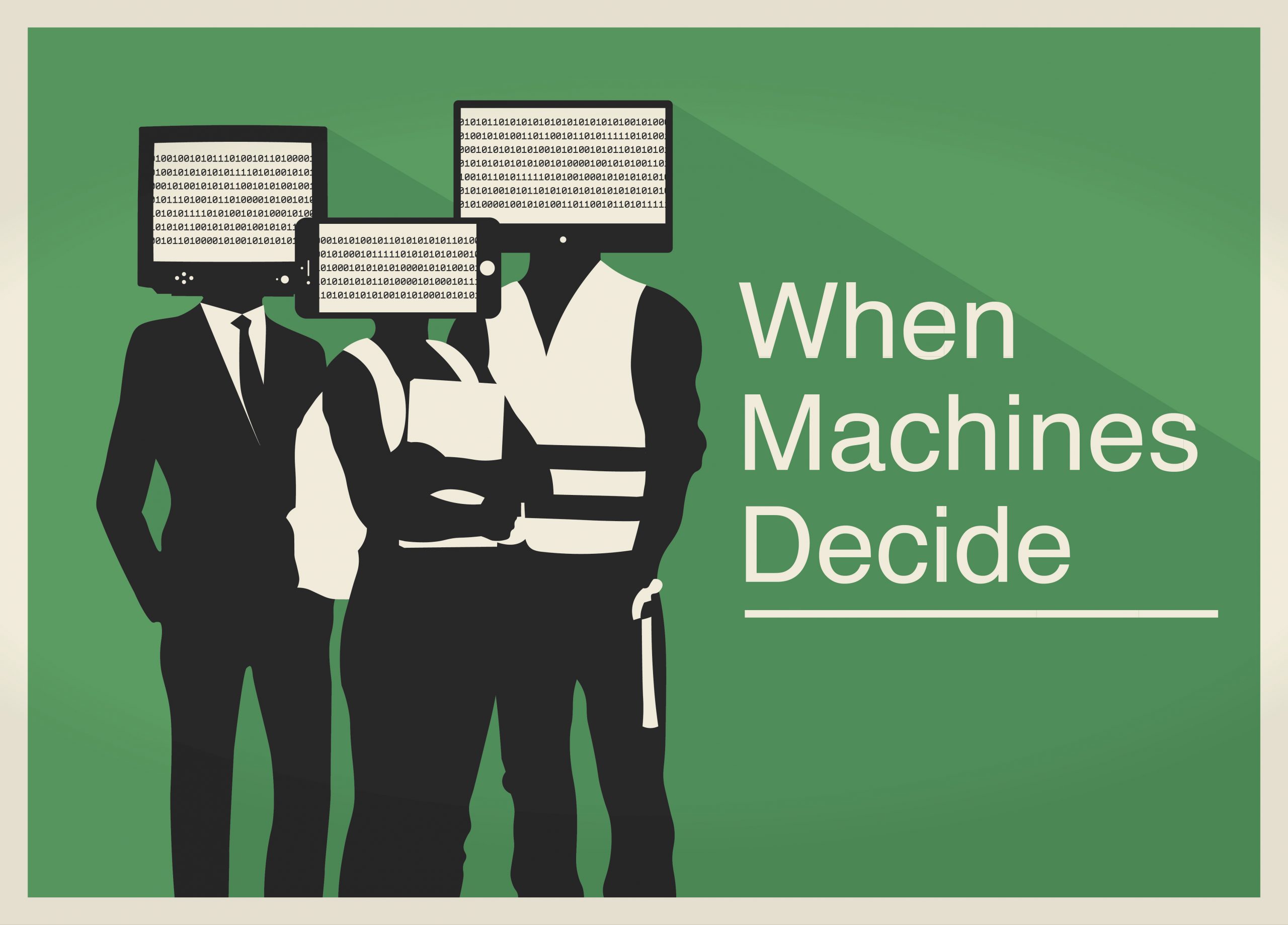 WHEN MACHINES DECIDE: THE PROMISE AND PERIL OF LIVING IN A DATA-DRIVEN SOCIETY

We live in an age of information abundance. An age where every aspect of our daily life is monitored, tracked, recorded and stored by data aggregators and government. Video cameras, automatic license plate readers, online activity trackers are pervasively and constantly gathering data. Common, everyday inanimate objects such as TVs, fitness bands, cars and cell phones are now linked to the Internet and to each other and are “always on”, collecting mountains of data about their surroundings and the people who use them. This data is being digitized and stored in massive databases for governments, businesses, scientists and others to review and analyze, using sophisticated algorithms and data analytics to make decisions that impact our lives.

We can analyze the social media activities of millions of people and deliver personalized ads and services. We can put an app on a smartphone that tracks every pothole in a road, automatically sending messages back to transportation offices. And, we can employ facial recognition technology to identify suspected criminals or detect genetic disorders.

The promise and benefit of automated decision making is clear. Or is it ?

The same social media activities can be used to determine whether you deserve to get a loan, or what interest rate you will be charged. Those pothole-tracking smartphone apps ? Turns out they only report on potholes in those affluent neighborhoods where everyone already has a smartphone. And, the same facial recognition technology used to identify the bad guys can also be used to determine whether someone should be hired for a job or not: which would be fine except that these tools have a hard time telling whether your eyes are open or shut !

Our machines are inherently agnostic — neither good nor evil. But, they may be used for both good and bad purposes. New technologies may reshape and restructure society in ways we might not expect and cannot predict. In this Praxis Lab, we will explore the ways in which the data revolution is changing our laws, our society and even the way we think of ourselves as free-willed humans. Will Big Data and machine learning usher in a new age of enlightenment or result in an erosion of autonomy and replace human judgments?  Join us as we explore the complex and fascinating world of Big Data and algorithmic decision making.

I have professionally reinvented myself several times over. I started my career as a working journalist in both print and TV and then went to law school with the thought of becoming a network correspondent reporting on the Supreme Court. Along the way, I developed a love of the law and thus began my second career as a practicing lawyer at Utah’s largest law firm. There, I developed a media law litigation practice where I was able to combine law and journalism by representing many local and national news organizations, including 60 minutes, CNN, the New York Times, the Associated Press, Redbook Magazine and the Salt Lake Tribune, among others. Ask me about my representation of the Globe supermarket tabloid who was sued by Marie Osmond. I have some great stories!

After 30 years as a practicing lawyer, I began phase three of my professional career when I was named as the Presidential Honors Professor at the University with a joint appointment at the law school and the Honors College. I had taught for several years as a part-time adjunct, but the opportunity to be a full time educator was too enticing. I now enjoy the satisfaction of teaching the best and the brightest and am no longer a slave to the almighty billable hour. Nirvana!

My background is in theoretical computer science: the study of the intrinsic complexity of computations. Over the years, I’ve become more interested in problems of data analysis (which I like to think of as a special case of high dimensional geometry !). I’m also a sci-fi fan, and many years spent reading cyberpunk thrillers got me thinking about our machine-enhanced future. A few years ago, I started imagining what it would be like to live in a world where all my decisions were controlled (or nudged) by algorithms that learnt things about me, and it didn’t take long to realize that we’re barreling into a future driven by algorithms that aren’t that smart, and aren’t particularly fair.