Source: A badger can bury a cow by itself

While studying scavenger behavior in Utah’s Great Basin Desert, University of Utah biologists observed an American badger do something that no other scientists had documented before: bury an entire calf carcass by itself.

Watch a video of the badger here.

While badgers and their relatives are known to cache food stores, this is the first known instance of a badger burying an animal larger than itself. The finding suggests that badgers may have no limit to the size of animal they can cache, and that they may play an important role in sequestering large carcasses, which could benefit cattle ranchers in the West. The study is published in Western North American Naturalist.

“We know a lot about badgers morphologically and genetically, but behaviorally there’s a lot of blank spaces that need to be filled,” says senior Ethan Frehner, first author on the paper documenting the badger behavior. “This is a substantial behavior that wasn’t at all known about.” 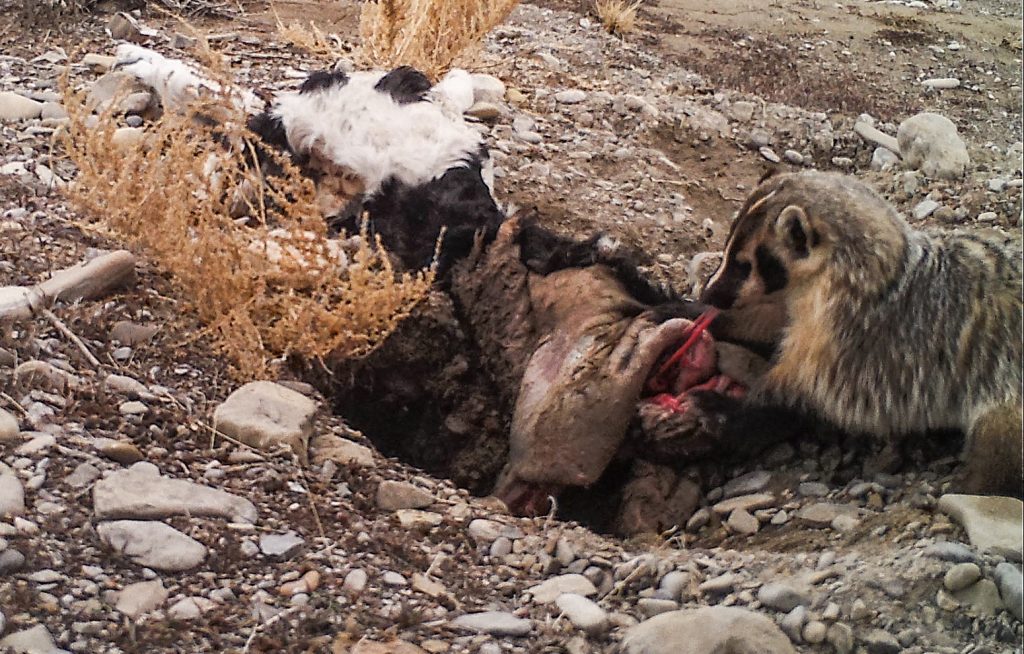 The team didn’t originally intend to study badgers. In January 2016, Buechley set out seven calf carcasses in Utah’s Grassy Mountains, west of Salt Lake City. Each carcass was staked down and equipped with a camera trap to document what scavengers visited which carcasses. Buechley, who studies vultures and other avian scavengers, hoped to learn more about the ecology of scavengers in the Great Basin during the winter.

Buechley went out to check on the carcasses after a week, and found that one was missing.

“When I first got there I was bummed because it’s hard to get these carcasses, to haul them out and set them up,” he says. “I thought ‘Oh, well we’ve lost one after a week.’”

He searched around the area, thinking that perhaps a coyote or mountain lion had dragged the carcass away, but after finding nothing, returned to the site and realized the ground where the carcass had been was disturbed. “Right on the spot I downloaded the photos,” he says, “We didn’t go out to study badgers specifically, but the badger declared itself to us.”

Little was previously known about badger behavior, Frehner says. “They’re an enigmatic species. A substantial amount of their lifetime is spent either underground or a lot of nocturnal behavior, so it’s hard to directly observe that.” Camera traps, a relatively new tool for researchers, made it possible to observe more natural behaviors.

In the photos, Buechley saw the badger dig around and beneath the carcass, which disappeared into the cavity created by the excavation. “Watching badgers undertake this massive excavation around and underneath is impressive,” Frehner says. “It’s a lot of excavation engineering they put into accomplishing this.” 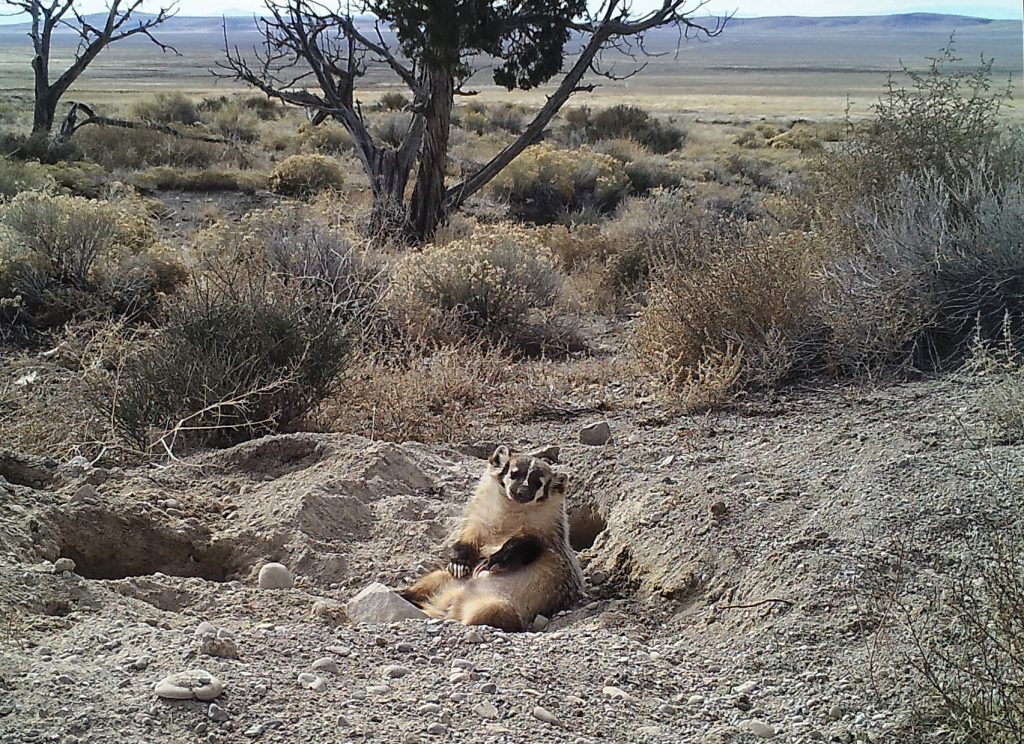 Camera trap records show that the badger completely buried the roughly 50-pound carcass over the course of five days, and then spent around two weeks in his underground burrow before leaving and intermittently returning to the burrow for the next few weeks until early March. According to the researchers, badgers cache food to isolate it from other scavengers and to keep it in an environment where it will last longer. “Like putting it in the fridge,” Buechley says. Previously, biologists saw badgers caching rodents and rabbits, but never an animal larger than itself.

Senior Tara Christensen assembled a time-lapse video of the burial, which shows the badger sitting contently atop the burrow. Buechley says, “Not to anthropomorphize too much, but he looks like a really really happy badger, rolling in the dirt and living the high life.”

Another badger, at another site in the same study, also attempted to bury a calf carcass, suggesting that the behavior is likely widespread for badgers. It’s unclear whether badger relatives, called mustelids, can also cache such large animals. Other mustelids such as weasels, wolverines and martens aren’t as specialized for digging as badgers are, but one account does document a fisher caching a black bear carcass under branches and bracken.

Buechley says that large-animal caching could have a large impact in the harsh and sparse ecosystem of the Great Basin. “There’s not a lot of resources out there,” he says. “A large dead ungulate can provide a ton of resources. So far on the carcasses we’ve put out, we’ve had turkey vultures, golden eagles, many ravens, bobcats, kit fox and coyote, so there’s a lot of animals that could be using this resource, and the badger just monopolizes it.”

The badger could also provide an ecological service to ranchers. Many ranchers see badgers as pests, because they dig burrows through rangeland and can eat chickens. But if badgers can bury a calf, they may bury other carrion before any diseases incubating in the carcass can infect other cows. “It’s not beneficial to have rotting carcasses out among your other cattle because of disease vectors,” Frehner says. Christensen adds, “Keeping large predators away is a big deal for a lot of ranchers. You could argue that if the carcasses are being buried, they’re not going to be attracting large predators.”

Both Frehner and Christensen participated in this study as undergraduates, an experience that gave 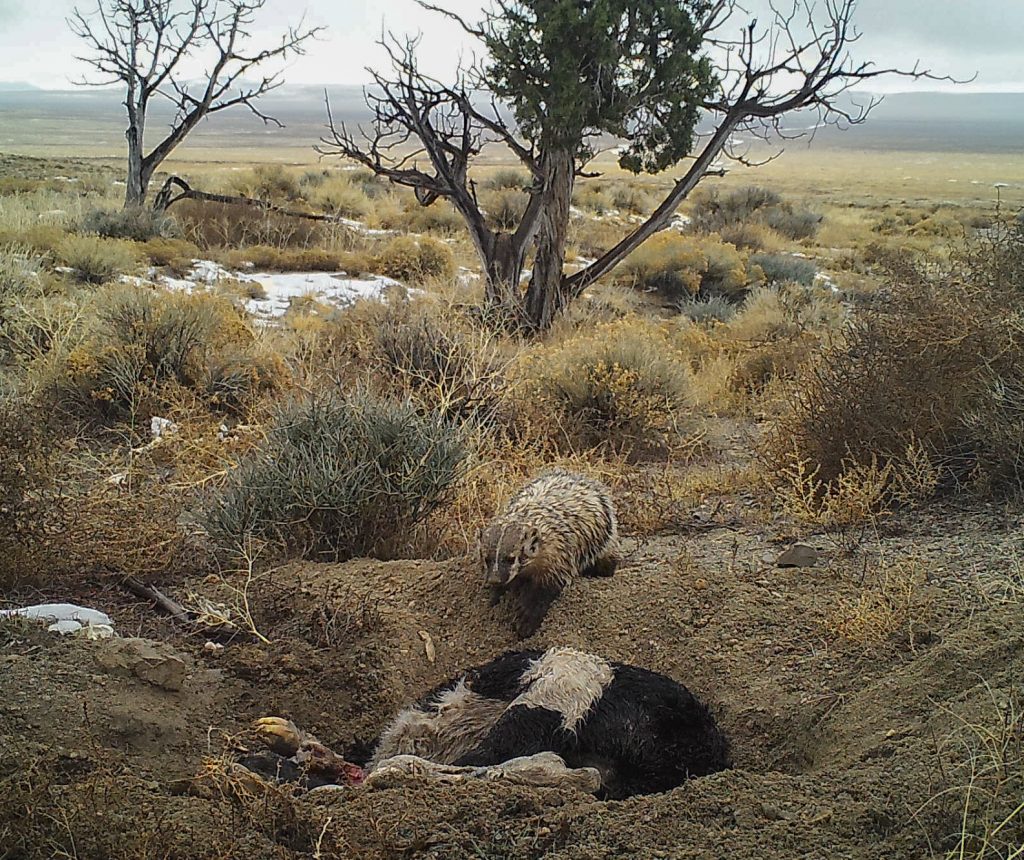 them an early insight into the research process. “Doing research and getting involved in a lab is a great way to see how science is done,” Christensen says. “I’ve learned a lot in the last few months about data analysis and using these things to find real results.”

Frehner adds, “Writing the paper has been a substantial learning experience for me that I don’t think I would have gotten any other way.”

The study highlights how little is known about scavengers and how much remains to be discovered. “This adds more questions than it answers,” Buechley says. “The nutrients in a carcass can be very important for many different organisms in an ecosystem. So if badgers are monopolizing them and they have the ability to bury perhaps any mammal carcass in North America and they’re present across much of the continent, the potential ecological implications are profound.”

The full study can be found here.

Watch the badger in this time-lapse video: